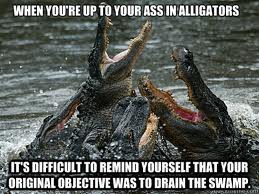 They can be a little distracting…

This has been a reoccurring theme for me lately. Why are you there? What is your mission? The sum total purpose for your existence in this place, at this time, is to do… what exactly? Some helpful questions to ask yourself periodically to help avoid alligators:

Anything else is lateral drift, mission-creep. Don’t get bogged down in the reptile wrestling of minor things: Office gossip, admin squabbles, paper cuts, petty territorial disputes, the opinions of people that don’t know any better and don’t ultimately matter.

Remember what your purpose is. Drain the damn swamp. Alligators attack? Try to use one hand to fight them off and keep one hand on draining that swamp – it’s why you’re there in the first place.

What is talent? Malcolm Gladwell, somewhat famously, has said he believes talent to be the innate love of some particular pursuit – more so than most other people. Listening to Penn Jillette’s new audio book “God, No!” he states that the real trick to doing magic is simply the willingness of the magician to spend an insane amount of time learning something that no one else would think would be so important. And simply for the sake of pulling off this “trick.” 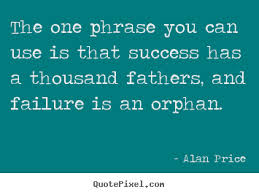 Most people don’t care that much, thus they don’t display the “talent” for magic that someone else does who has put in thousands upon thousands of hours.  Gladwell believes similarly, noting that Wayne Gretzky so loved hockey that he thought about it incessantly. In fact, he thought about it so much that he was the first to score a goal by picking up the puck with his stick and flipping it in from behind the net. That’s love. The same, of course, would be said of Michael Jordan who was famously cut from his High School basketball team but put in intense amounts of work to get back on, and to secure a scholarship to UNC.

Gladwell also notes, through his best selling book “Outliers” that many famous successes were due to being in the right place at the right time, or even being born at the right time. No doubt that it is helpful to turn up in situations that are primed for success. By definition though, these success stories that he focuses his attention on, are true outliers in that they’re statistically abnormal. The vast multitude of successes and failures that occur each day are of the far more normal variety, not involving some extreme set of criteria.

During the Summer of 2012, a speech by the President declared “If you got a business, you didn’t build that. Somebody else made that happen.” Setting off a discussion about success and its roots, the likes of which hadn’t occurred before in such a public way. Of course, conservative leaning people were up in arms, declaring that they had in fact “built that” and that success isn’t reducible to  simple luck. Likewise, failure isn’t the result of bad luck necessarily.

Clearly, liberally minded individuals tend to disagree with their conservative counterparts. Gladwell is dismissive of the greatest of successes as being too much a manifestation of luck, be it genetic, chronological, or cultural. There is something to be said for noting the obvious advantages the cases in Outliers enjoyed. However, I don’t think that’s the most effective way to think about success.

When we say to ourselves, success is the product of luck, we’ve let all motivation out the window. If we’re not responsible for our success, if there is no credit to be taken for having worked hard and succeeded – especially where others have failed, then what’s the point? For the collective good? Take a good look at Russia and tell me how that’s working out.

The United States makes up 22.5% of the Global economy despite our making up only 4% of the population. Oh, and we didn’t exist as a country more than 250 years ago. How old is Egypt? Europe? China? Rank of GDP by Country Ours has been an economic system of opportunity to do whatever you like and to create value for those around you. Starting a business and putting in the long hours is not an easy road to hoe, regardless of what kind of background and normative advantages you have. If success was entirely luck, how then to explain for the out-sized success of a 237 year old country vs the other 180 or so? The US has been that lucky for all this time?! Year in, year out?!

Obviously, the young science student who was born to well-off, educated parents, who provide her with the financial, emotional, and cultural support to attend a University in pursuit of a STEM degree has a little help in the pursuit of her success, but she still has to love it. Like Gretzky, Jordan, or Penn Jillette, she has to be willing to spend her time and energy on difficult studies. Is it a little easier for her than the son of a single parent who is working three jobs to help pay for text books? Certainly – but she still has to do the work. If you tell her that after she’s completed school, gotten a job as an engineer and finally secured herself some success at the age of 40, that she didn’t really earn it, what are you doing to the motivation to keep going? Is telling her that her success is not hers done so to benefit those that do not achieve? To help alleviate their bruised feelings as they wait for their good luck (or more likely, bad luck) to arrive?

I know people like that. They’ve never found success of any real sort, and generally struggle through life. Nothing much interested them enough to move beyond the comfort zone of sacking out in front of the couch. Reading seemed tedious and pointless. Besides, success and wealth just sort of happen to people, right? It’s not the same thing as people trying and failing – that’s worthy of the greatest of respect. Trying and failing is what has made our economic success so powerful – we take risks and we get back up off the floor and try again. No, the real shame is telling some portion of our population that they’re not responsible for their successes or failures, that things just… happen.  As much as I respect Mr. Gladwell, and hold his work in the highest regard, I can’t agree with his outlook in this instance.

What do you think? Is success largely the result of the conditions one comes up in? Or is success as much, or more dependent on individual effort and the strive to achieve? 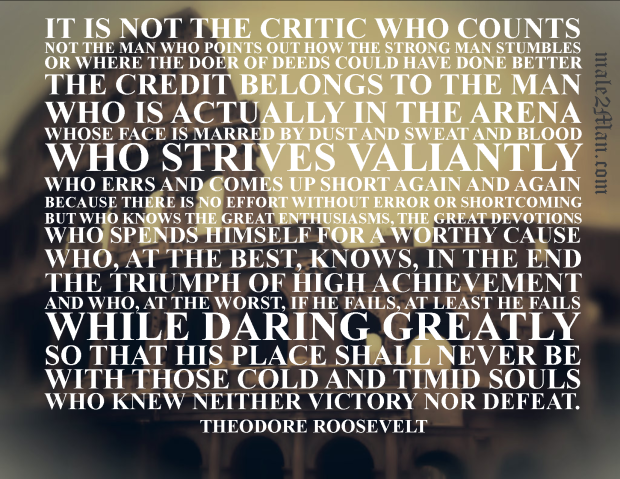 “Knowing neither victory nor defeat”

Error: Twitter did not respond. Please wait a few minutes and refresh this page.