Advertising is more often than not, about interrupting people. A lot of it is imitating what someone else has done and what other ads look like for that same type of product or service. There’s a straight and narrow path and plenty of people that would prefer to walk down it. For them, it’s not about connecting with people, it’s about being safe.

For these scared few, their creedo can be summed up simply:  CYA BAE, or “Cover your ass, before anything else.”

Making meaningful, original, honest work that aims to connect the brand/team with the client isn’t high on that list of motivations. If asked, they’d answer that they’d love to connect with people, and many may believe that their benign work is doing just that.

I’m in the business of housing college students, so being relate-able scores major points with our customers. In addition, our students have grown up with the internet since birth – and having ads thrown at them through every medium their entire lives is a constant. Originality goes a long way towards breaking through their defenses. Honesty has immense value.

I saw the following two flyers on ebaumsworld.com and immediately fell in love.

Set Rations to “Meager” and Pace to “Grueling”

If you’re anything like me, you LOVED Oregon Trail as a kid. There’s an immediate emotional connection, coupled with the unexpected and the humorous. I’m hooked. I’m connected. Granted, it’s not advertising anything, but imagine a little logo in the corner and this posted at your property’s crosswalk across from campus? It’s enough to highlight the sense of you humor of your team, and to show that you’re human.

The next is a little rougher around the edges as far as language is concerned, so if you’re easily offended by light cursing, might I suggest skipping this one.

Caroline, please edit this blog for $15 an hour.

Probably without realizing it, Caroline totally nails the bulk of the Six principles of Dan & Chip Heath’s best seller, “Made to Stick” which I wrote about in the past. 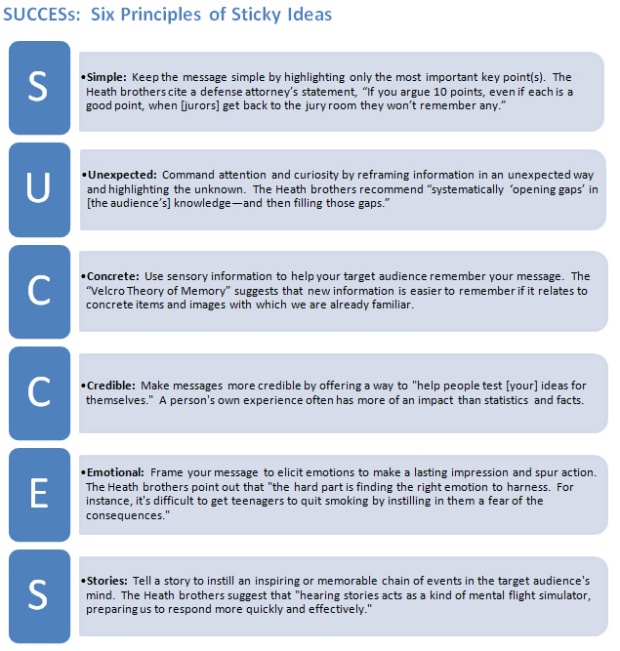 1. Simple: She’s got a simple message! “I fix your paper so it doesn’t suck!”

2. Unexpected: You didn’t expect this, and certainly not with the cat picture.

3. Concrete: Caroline. Edits. Papers. Got it?

4. Credible: There’s a decent sample of her writing, so you could argue she’s credible, though her target customer wouldn’t know that for sure.

5. Emotional: She’s funny! By stating bluntly what she’s thinking she makes an emotional connection to her audience – especially  the type that’s likely to purchase her services.

6. Stories: She tells one for sure. She even gives example of exchanges she’s likely to have with you.

Essentially, the Heath brothers analyzed all kinds of messages to find out which ones stuck with people and which didn’t – and what qualities they possessed. You don’t need all six apparently for a compelling message, but the more the better. Caroline is almost perfect here. If asked weeks later, you could tell that; Caroline edits papers, won’t do so after 9pm because her meds wear off then, and that it’ll run you $15 and hour.

What would you have told Caroline if she’d made these for you and wanted to place them around campus, but YOU owned the editing service? Would you have said it’s too risky? That you’d prefer something a little safer? Maybe just straightforward – “editing services, $15/hour, call Caroline.” You could have, but then you wouldn’t have nearly 2.5 million views on imgur.

Understood, this doesn’t work everywhere and for everything. We’re not going to run the same style ad here, but the lesson is important – take away the reasons why it works and apply to your own marketing and advertising. Resist the urge to play it too safe next time. Aim to make a connection and get your message to stick!