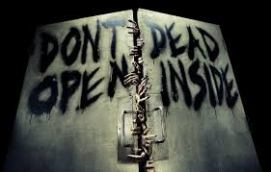 I don’t usually watch things with zombies. They’ve never been a draw for me, but this past week I decided to try out The Walking Dead on Netflix. God Damn it.

Zombies, on their own, are quite simply, crap. I Couldn’t care less about walking corpses or anything with gore. Not that I scare easily, but I tend to find the whole exercise boring. After all, i’m surrounded by figurative zombies every day: though with an admittedly lower penchant for wearing my viscera like so much KISS makeup.

After all, i’m surrounded by figurative zombies every day: though those have an admittedly lower penchant for wearing my viscera like so much KISS makeup.

No, the real endgame here for me has been the relentless feeling of near hopelessness which plagues (puns!) the lot outside Atlanta. Particularly, the lead of “Rick Grimes” who is charged with taking care of not just his family (son and wife) but also the entire group of survivors as their leader.

I feel you Rick, I really do.

I’ve got a family and a team of people – in fact, two of them. While we’re not overrun with the un-dead, it can often feel that way. How the hell do we get out of this? How do I find enough time for all the responsibilities? How do you seek, not just to survive, but to thrive and grow in the midst of so much uncertainty?

Maybe that’s why I can’t stop watching it lately, or why I started in the first place. I want to know that someone else is going through something similar, and I want to put my feet up and watch this guy do it for a while and see how he fares. Or maybe it’s that zombies are the “insert pain in the ass/existential threat” we all fear?

Life, when you want to do something, can have a funny habit of piling on. Want to get out of your comfort zone and do something for the benefit of your group? Zombies will show up. Want to take a rest for a moment and count your blessings? Zombies. Love someone more than anything? Zombies probably are heading that way, however slowly. And they always move slowly – just enough for one to internally debate the consequences of their arrival.

I’m sure they’ve always been there, each generation with their own zombies, and many of them the same as the ones we fear now. I’d like to think we don’t necessarily suffer from more of them, but rather we give them more windows to break through. Instead of barricading our homes, we’re letting them through the open window of our phones.

I’m not hopeless – not even close. And by all accounts, that’s the most scared a person can get. When you have nothing, you fear nothing – have it all and you have all to lose. Tell me that doesn’t describe our America today.

And by stuff, I really mean people. I have the most loving and amazing family and friends. I have a team of people I get to work with which is just phenomenal top to bottom. The thought of losing any of them is just… exhausting. But each day I wake up and want to do it again, because that’s what love makes us do.

I don’t know, forget the moaning and wearing of intestines as french braids, I’m more concerned with the relevant allegory of the whole thing. The notion that I’m Rick, doing his best to protect his family and his team, against such overwhelming odds with such small arms is just too familiar to be left alone.

What are your zombies? What do you quietly fret over and wish to god you could protect once and for all? Or do you really just like watching the dyed corn syrup pour out of punctured zombie skull? Because that’s cool too.